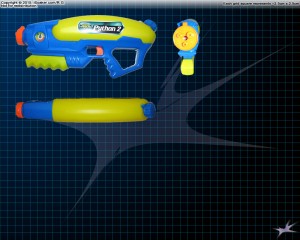 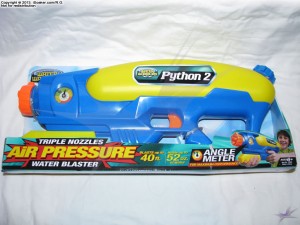 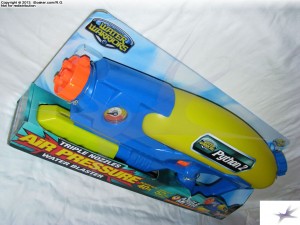 Looking at the Python 2 from another angle, the semi-tracked nature of the pump can be seen. The extent of the trigger-grip region comes more into view, but remains inaccessible for testing while the water blaster remains boxed. Granted, the packaging’s primary purposes are to keep the item safe while in transport and on the shelf as well as to catch the eye of the consumer as one wanders down the toy aisle. But packages only contain promises of performance; the only way to know for certain is to…

Behold, the Water Warriors Python 2 in its full glory! Free from the confines of its packaging, the Python 2’s pump grip and sculpted trigger-grip region are fully visible. The trigger-grip’s back extension provides both structural stability as well as added functionality as a good place to hold the blaster when refilling. Picking it up, the beauty of the Python 2’s design can be immediately felt in its near perfect balance both when empty as well as when filled. 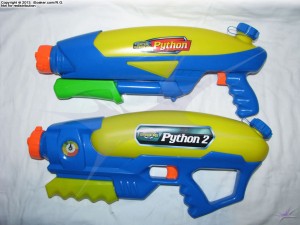 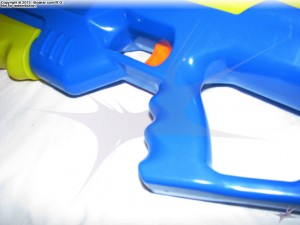 Thanks to its nearly centered placement of the trigger-grip region (mostly centered on the reservoir) combined with its semi-broad, smooth underside of the reservoir, the Python 2 fits nearly perfectly in one’s hand. The open nature of the trigger-grip allows even those with larger hands to not be cramped by its design. The trigger, itself, pulls smoothly, yet with enough resistance as to not be activated by accident. Perhaps the only way to improve the grip area any more would be to add some light texturing, but there’s truly no issue when it comes to holding this water blaster. 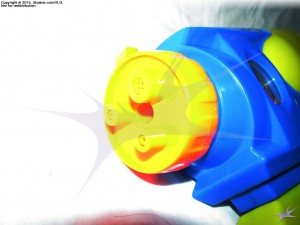 The Python 2’s pressurized reservoir system powers its selected nozzle. Like the Water Warriors Equalizer, a properly filled Python 2 (approximately filled roughly 2/3 to 3/4 full) can be pumped and pressurized enough to completely empty the reservoir without needing to pump in more air while achieving greater than 80% power throughout. Of course, pumping in more air in-between shots if always recommendable when possible, but it is nice to know that re-pumping is not an absolute necessity. The Python 2’s two stream settings and one burst setting all provide different, yet useful functionality. The largest stream offers good drenching power and full range. The burst setting offers increased drenching power and full range, but may be more easily affected by cross-breezes. The smallest nozzle setting still offers good power while definitely letting one conserve water a little more when one’s reservoir is running low. The nozzle selector, itself, has a small tab on one side that helps one turn the selector as well as providing a visual clue regarding what nozzle is selected without needing to look at the front of the blaster. Of course, being a pressurized reservoir water blaster that can empty its full reservoir on a single charge, shot times are excellent on any setting. The Water Warriors Python 2 is basically as good, if not better than the Water Warriors Python (2012), on all its nozzle stats. 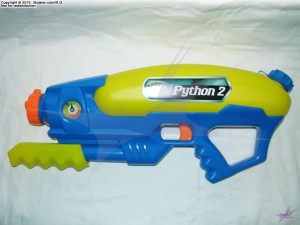 Of course, while streams are important, how long it takes to get up to pressure is vital as well. Thankfully, the Python 2’s forward-mounted semi-tracked air pump is comfortable to use and does a great job at pressurizing a properly filled reservoir quite quickly. While the reservoir should be pressurized with 30-40 full pumps, this can be achieved easily in less than 30 seconds for the focused warrior. The semi-tracked nature of this pump prevents it from rotating and makes it feel quite sturdy and stable, even when fully extended. The full pump length does feel to be on the shorter side, though. 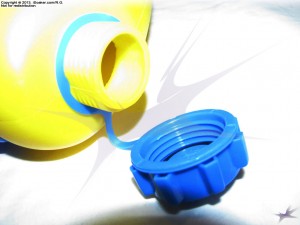 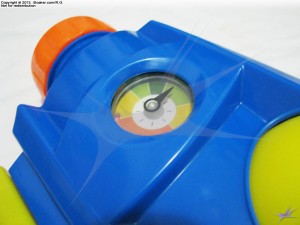 Beyond this, the Python 2 has one added feature: an angle meter. While simple a weighted level indicator with a coloured background, the arrow points upwards and indicates whether the Python 2 is at an optimal firing angle. While water warfare veterans may not need this feature during battle, the angle meter is good when training those less familiar with pressurized water blasters. Most already know that angling a stream upwards when firing will increase range, but many overlook the fact that most air-pressure water blasters do NOT fire downwards well nor are able to fire upside-down. Few remember that the placement of the intake tube towards the back of the reservoir also means that downward angles tend to put the intake tube’s opening above the subsequent waterline. Granted, during battle, one rarely has the time to check whether one is at an optimal firing angle, but for training, this device can prove useful.

Of course, while all of the above is important, the true value of a water blaster is how well it performs in a water fight. The Water Warriors Python 2 not only feels good to hold, but its power and balance make is great to use in battle. Ambitious Users may even opt to try dual-wielding two Python 2s so long as they remember to properly fill and fully pressurize their blasters before heading out from safety. The Python 2’s nearly 3x burst setting and 2x large stream setting will keep up with all but the larger elastic-chamber-based water blasters.