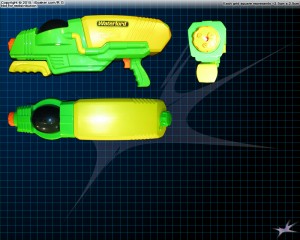 The Water Warriors Waterlord is the first new elastic-pressure-chamber-based water blaster by Buzz Bee Toys in a little over 4 years (See: Water Warriors Evolution Tree – Elastic -Based) and just shy of five (5) years since Buzz Bee Toys Inc. was sued by Hasbro Inc. for infringing on the “CPS Patent” and being served an injunction, though no monetary penalty (See: History of the Water Warriors brand).

The Water Warriors Waterlord design is a significant departure from past Water Warriors water gun designs. While it uses Buzz Bee Toys’ rubber diaphragm-based technology, thus having the “half-sphere” pressure chamber present on the top of the forward section of the body, this water blaster is much chunkier and more angular than most other previous models in the Water Warriors line. 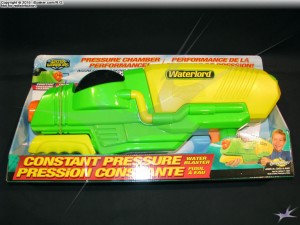 When you see the Water Warriors Waterlord on the store shelves, the first thing that becomes readily apparent is its size. For those familiar with the original Super Soaker CPS series, the Water Warriors Waterlord is very close in size to a Super Soaker CPS 1000. Notably larger than most air-pressure-based water blasters, the one thing that is not as apparent from the Waterlords sideview is how wide this water blaster actually is. 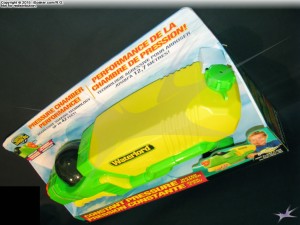 This 3/4 view of the top of the Waterlord shows just how much volume this water blaster occupies. Moreover, beyond the black pressure chamber housing and nozzle area found at the front of the blaster, the remainder is all reservoir tank. Thus, while the Waterlord’s size is on par with a Super Soaker CPS 1000, it manages to hold nearly an additional 1L (~33oz.) of water more than the older CPS 1000. This added capacity also significantly increases the Waterlord’s weight when filled. This becomes particularly noticeable since the Waterlord, unlike the Super Soaker CPS 1000, lacks a shoulder strap to help distribute the weight. 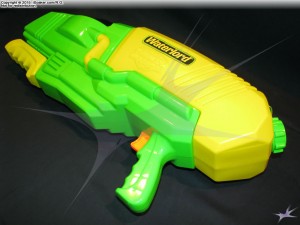 Once free from its packaging, the clean, simple lines of the Waterlord come into full view. With minimal additional decoration and texturing, the Waterlord is pretty much reservoir tank, pressure chamber, trigger/trigger grip, and nozzle. Operation is as expected for any separate pressure chamber water blaster: the pump is used to draw water through a series of one-way valves and tubes from the reservoir and push the water into the pressure chamber, thereby building pressure, in this case, as the rubber diaphragm chamber expands.  Pulling the trigger opens a valve at front of the blaster allowing the pressurized water to exit through the nozzle. However, besides lacking a shoulder strap, the position of the trigger/grip region on the Waterlord is slightly farther back than optimal, making this blaster feel somewhat front-heavy, particularly when fully loaded and pressurized. Though most would likely be supporting this blaster with both hands (one on the pump grip and one on the trigger grip), it is always nicer when a water blaster model feels more balanced. Nevertheless, the Waterlord is quite comfortable to hold and use, presuming, of course, you are ok with the added weight. Those with lesser upper-body strength may not find this water blaster as easy to use; definitely not a water blaster for younger children. 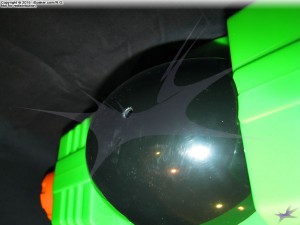 For the water blaster enthusiasts, perhaps the most significant and important aspect of this water blaster is the return of an elastic-based pressure chamber. Were the front chamber an air-pressure chamber, there would be no hole on its top (well, if there was and it was supposed to be an air pressure chamber, chances are it wouldn’t be able to pressurize too well if the air and water could escape through the top *hah*). For those less familiar with how this technology work, see the article on Elastic Pressure Water Blaster Technology at iSoaker.com. The black plastic shell serves as a protective layer as well as a size limiter for the internal rubber diaphragm. The hole allows air to exit the shell as the chamber expands, then re-enter the shell as the chamber contracts when the nozzle valve is opened and water exits that way. While arguable not quite as powerful as full chamber CPS-class rubber bladders, the rubber diaphragm system offers many advantages over air-pressure based systems including faster functional pressure in fewer pumps, no firing angle limitation once the pressure chamber is filled, and more consistent stream performance. 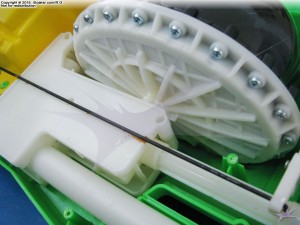 one soon sees the large number of small screws that hold the pressure chamber together as well as an interesting additional plastic sheath that covers some of the valve assembly and connective tubing. Why this additional plastic was used inside the Waterlord remains unclear, but we have not attempted to open up this blaster further yet for fear of not being able to successfully put it back together. 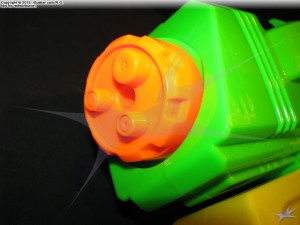 ressure chamber powers its nozzles. There are three nozzle settings available on the Waterlord’s nozzle selector: N1: small stream; N5: large stream; and N9: burst setting. The pressure supplied by the elastic chamber easily powers all settings. The two stream settings yield solid, smooth streams that get respectable range. The burst setting offers better area coverage. While not as spreading as a fan or shower-type setting, there is also no significant reduction in range, achieving basically the same range as the small stream setting.  From testing, it does feel like the Waterlord’s pressure chamber would be able to support an even larger nozzle setting that its current largest factory setting, but how much this may affect stream performance remains to be tested.

The Water Warriors Waterlord is a solidly built, high performance water blaster with great capacity along with respectable output and range. Its greatest areas of improvement would be an inclusion of a shoulder strap and a larger available stream nozzle setting. Of course, the other MAJOR shortcoming is that the Waterlord is only currently available at Walmart Canada. I should also note that while the general feel and raw performance of this water blaster was tested, I have not had the opportunity to test this blaster out in any extensive battle scenario. As such, how much of a handicap its weight on the arms gives to the user after longer use is unclear. Nevertheless, the Water Warriors Waterlord is considered the BEST new water blaster for 2015 as well as *THE* water blaster to buy in 2015, assuming you can get your hands on one, of course.