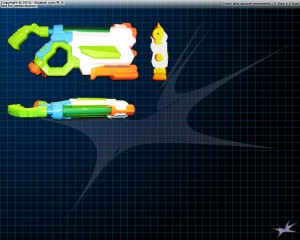 Nevertheless, featuring a top-mounted syringe-like mechanism over a standard-looking pump-action set-up below, I am unaware of any other water blaster that opted to use this configuration. The dual-pump design of this blaster does confer some level of intimidation, particularly over the uncertainty regarding the drenching power of the upper pump. Whether its performance matches its looks needed to be tested so…. 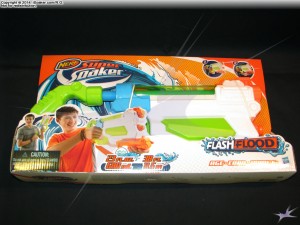 store shelves, the Nerf Super Soaker Flash Flood’s upper syringe-type pump and transparent green pump shaft are clearly visible. The lower pump is obscured by the packaging, but is readily visible on the front panel graphic of the guys holding this blaster. Granted, beyond the design, the other thing I immediately noticed seeing this package physically in front of me was how small this water blaster actually is. Not quite 44cm (about 1.5 feet) long and barely 6cm (~2.4″) wide, I had hoped for something a little heftier when I first saw pictures. Then again, its size proves to have its advantages and disadvantages. 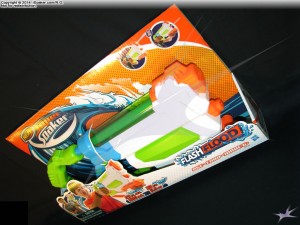 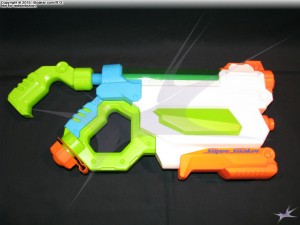 Of course, to appreciate how the Nerf Super Soaker Flash Flood actually is, it must be freed of its packaging. Besides having a clearer view of the lower pump, the other part that is now clearly visible is the reservoir’s cap, positioned at the bottom-rear of the blaster. Part of me had desired a side-mounting for the cap since bottom-facing caps are known to burble and tend to be more prone to leaking.  This particular cap, however, lacked any discernible hole and/or valve mechanism, meaning air was unlikely to enter through the cap when pumping. Of course, this brings up the question: what happens as the pumps pull water out of the reservoir? If air cannot enter, the reservoir increases its likelihood of imploding due to pressure differences. 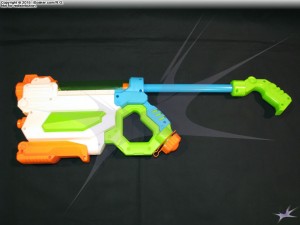 Though definitely a pump-action water blaster, the other surprise (at least to me) was confirming at the upper syringe-based pump filled from the reservoir and not through its nozzle. On the one hand, this, of course, makes perfect sense; the User only needs to worry about filling the reservoir, then can choose between using the upper, larger pump or using the smaller, water-conserving lower pump. However, with a larger volume pump drawing water from a limited size reservoir, it can quickly drain your water supply. In fact, it takes merely four (4) full pumps of the upper pump to empty the reservoir. 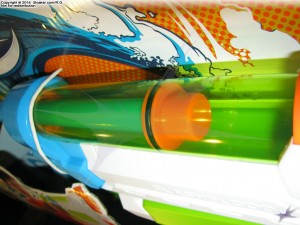 However, the greater problem with drawing water from the reservoir is the need for valves and tubing to make this possible (See: iSoaker.com Pump Action Water Blaster Technology article for a more detailed explanation of the mechanism needed). In the case of the Nerf Super Soaker Flash Flood, the top-position of the larger volume pump combined with its large diameter and single O-ring seal means one can apply a large amount of force and create a decent volume of low pressure that exceeds how quickly water can flow through the valve and tubing to enter the upper pump shaft. This puts increased strain onto the pump rod’s seal which, thanks to the transparent tube, can be seen failing and allowing air to enter the pump shaft if one attempts to fill the pump too quickly. To avoid this, one must extend the pump more slowly, but this puts the User at a disadvantage in that after the shot is made, it takes longer than desired to refill the system. 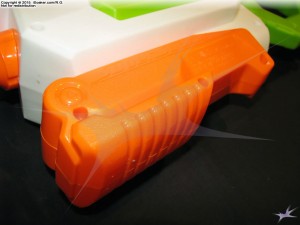 The lower pump, being closer to the reservoir as well as having a smaller internal volume, does not suffer as badly as the larger, upper pump. Using the lower pump, alone, the Nerf Super Soaker Flash Flood behaves like most other pump-action water guns, producing decent, but pulsing streams since the streams cannot continue during the pump-refill stroke. 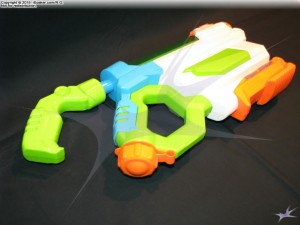 Ironically enough, the one thing I did fear about using a blaster with this configuration of pumps was the awkwardness of needing to swap hands when using different modes. Normally, when using a pump-action water blaster, one’s dominant hand tends to hold the rear grip while one’s other hand works the pump. This hand placement is often reversed when using syringe-type water blasters since the “pump grip” is at the rear of the syringe. However, due to the Nerf Super Soaker Flash Flood’s small size, though slightly more awkward, this water blaster can be operated by keeping one’s dominant hand on the rear reservoir grip while toggling one’s other hand between the lower and upper pump grips even though the upper pump grip is behind the rear reservoir grip. That said, I also think my aim is less accurate when attempting to use the upper pump in this manner, but it is a faster swap than needing to change the position of both hands.

At present, I haven’t had the opportunity to do any range testing on this product. Based on its output and how potent the stream feel, my guess is that the lower, smaller nozzle should perform similarly to the Nerf Super Soaker Freezefire (2014). The upper stream, having both a larger volume and larger nozzle opening, should be able to push its stream farther, though am uncertain whether it will surpass the 12.5m (~41′) mark. I am also considering opening up this blaster to look a little more at its internals, but will not to do until completing range testing.

The Nerf Super Soaker Flash Flood is a solidly built unique under-over combination of a pump action water blaster combined with a syringe-type water blaster. Its small size allows one to use either pump without needing to switch both of one’s hand positions, though swapping hand positions may increase one’s ability to aim more accurately. Both pumps draw water from its reservoir, but the upper, larger pump cannot be refilled too quickly from the reservoir. Attempting to force it to fill faster results in the pump rod’s seal to temporarily fail, letting in air into the pump shaft. Moreover, being merely a pump-action water blaster, the Nerf Super Soaker Flash Flood is significantly inferior in terms of power and performance compared to the original 2005 Super Soaker Flash Flood. Its novel water blasting combination looks initially intimidating and may be of interest to some, but its actual effectiveness in a water fight will likely leave its User yearning for more.