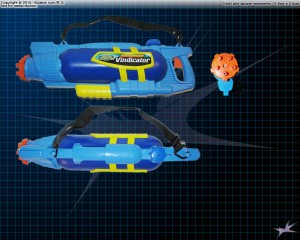 The Water Warriors Vindicator was the largest of the linear-style water blasters released by Buzz Bee Toys Inc. in 2009. As the big brother of the Water Warriors Equalizer, the Vindicator sports a five (5)-setting nozzle selector, shoulder strap, and an internal elastic pressure chamber. As one of the most potent water guns since the end of the CPS-brand of Super Soaker, the Vindicator was a sight for sore eyes. Sadly, its development and evolution was cut short, though there remains hope that we have not seen the last of this type of blaster. END_OF_DOCUMENT_TOKEN_TO_BE_REPLACED

With the release of the Water Warriors Waterlord in Walmart, Canada, we are at the re-birth of seeing elastic-based water blasters returning to the consumer market. Buzz Bee Toys Inc’s decision to try for a Canadian release first was likely due to multiple reasons: date of expiration of the patent for which they had previous accepted an injunction,  start of the season being later in Canada than in the US and/or other countries, and the ability to work with specific retailers to make it happen.

END_OF_DOCUMENT_TOKEN_TO_BE_REPLACED

As some have already seen, the review of the Water Warriors Waterlord is now posted on iSoaker.com. The Waterlord is the first rubber diaphragm-based water blaster to be produced by Buzz Bee Toys Inc. since the injunction imposed on them back in 2010. For various reasons, the Waterlord appears as if it will be only available at Walmart Canada in 2015, but with luck, it will appear on shelves in the US for 2016. END_OF_DOCUMENT_TOKEN_TO_BE_REPLACED