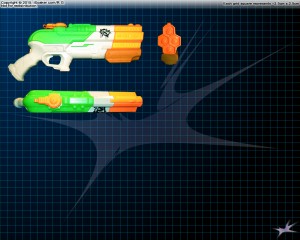 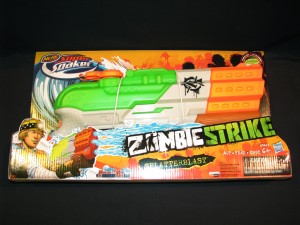 The Nerf Super Soaker Zombie Strike Splatterblast shows off its nozzle configuration and small-ish reservoir in its box, but its pump as well as grip region and fully obscured by the lower label area. The illustrated User of the Splatterblast has his blaster shooting slightly deformed and highly overrated streams. 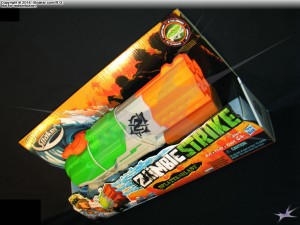 Looking at the packaging from another angle, the diamond-like configuration of the nozzles becomes apparent as does the actual small size of each of the nozzles’ diameters. The illustration of the streams make it appear as if the Splatterblast will produce thicker, non-uniform streams, but the actual nozzles suggest otherwise. From this top angle, the brown wood-pattern-engraved plastic pump comes into partial view.

Despite being able to see a little more, due to the design of the package, there is no easy way to feel how the Splatterblast is like to hold and use. So… 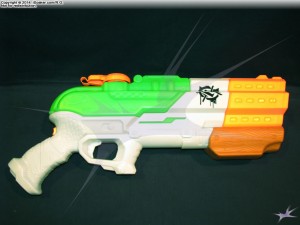 Behold, the Nerf Super Soaker Zombie Strike Splatterblast in its full glory! Granted, we are still talking about a 4-nozzled pump action water blaster with a light up reservoir, but simply put, the Splatterblast’s styling looks great. In general, the build feels quite sturdy and the pump and rear grips are nicely sculpted and feel good to hold. From the wider-angled rear grip region to the over-sized orange area on the front that makes the nozzles appear larger than they are, if the Splatterblast fired the way it looks like it should, it would be awesome! Unfortunately, reality tells a different story. 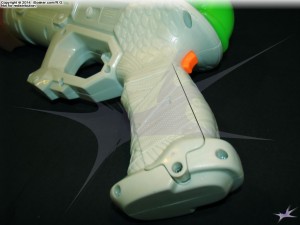 On the back side of the grip is a small, orange trigger/button for activating the glowing reservoir feature.  Also, on the left side of the grip, the battery compartment can be seen. Admittedly, I haven’t tested how bright the reservoir actually looks when this feature is activated, but the value of a glowing water tank in an actual nighttime water fight is highly questionable. 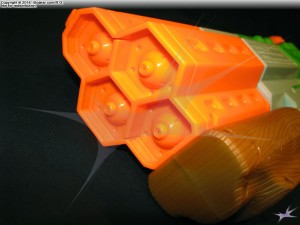 What attracted me to this water blaster, though, was its four-nozzle configuration. Some may think that four separate streams is also merely another gimmick-y feature that does not warrant attention. However, if one were to look at how streams impact, akin to how crushed ice cools a drink faster than the same amount of ice in a solid cube, four separate smaller streams hitting a target will soak more area faster than a single stream pushing out the same volume per second. The catch (and there’s always a catch) is that smaller streams are more easily affected by wind and break up faster than larger streams, resulting in generally lower maximum ranges. Considering all that, the Splatterblast does perform well for a pump-action water blaster that divides its pump volume into four streams, though not quite equally. The three upper steams appear to get a little more of the pump’s power than the lowest one. The streams, as expected, do break up towards their maximum range, but then again, the likely purpose of the Splatterblast is to cover a larger area, akin to a shotgun-type blast. That said, pushing only ~20mL (~0.7 oz.) per pump stroke, one can definitely produce splotches, but it will take several hits to get one’s target truly soaked. As can be seen in the picture, each of these four nozzles are quite small (akin to squirt pistol size). The Splatterblast pushes out  approximately parallel, thin streams, not torrents, of water. 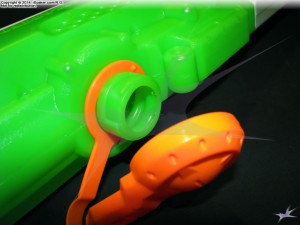 The Splatterblast’s reservoir holds a little over a litre (~35oz.), allowing the blaster to have roughly 50 shots before needing to refill. Not a bad count, but the reservoir does seem to go by quickly in the heat of battle. 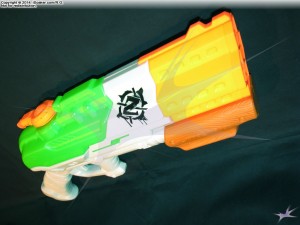 The Nerf Super Soaker Zombie Strike Splatterblast is an interesting, pump-action, area-soaking water blaster. It’s unique four nozzle configuration increases the area one can soak without overly sacrificing effective range. Granted, the smaller streams are more easily affected by wind than a thicker stream, but the Splatterblast appears to be meant for use as a closer-range, wider-area blaster. The usefulness of its glowing reservoir is rather questionable, but this feature is not necessary for the Splatterblast to function. Of course, its limited pump volume means it will take a good number of hits to get one’s opponent soaked. Nevertheless, its fun styling, decent performance, and decent capacity make this a respectable choice for one’s growing Armoury.