Recently updated the Water Warriors brand Evolution Tree on iSoaker.com. Looking at how iSoaker.com was built, there are many support pages that need to be manually updated each year as new water guns are added to a particular series. I’ve experimented with some content management systems, but haven’t been satisfied with any (not to mention most end up with so many updates and steep server requirements, it gets costly (time and money) to keep them running.

I need to figure out a better way, though, to manage the information on my site.

As some have already seen, the review of the Water Warriors Waterlord is now posted on iSoaker.com. The Waterlord is the first rubber diaphragm-based water blaster to be produced by Buzz Bee Toys Inc. since the injunction imposed on them back in 2010. For various reasons, the Waterlord appears as if it will be only available at Walmart Canada in 2015, but with luck, it will appear on shelves in the US for 2016. END_OF_DOCUMENT_TOKEN_TO_BE_REPLACED

Another shot of an upcoming single pressure chamber water blaster… 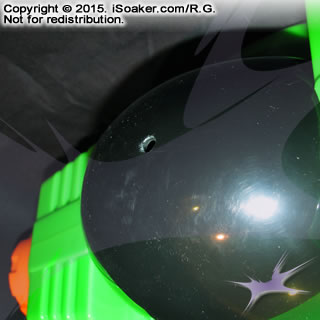 Though the temperatures in the forecast remain near-freeze for the upcoming weekend here, it is time for me to do a little spring-cleaning of my collection and prepare for the “On-Season”. Warmer weather should just be a week or so away (though there remains the chance of chills for at least another month).

For spring, I don’t dive into everything, but I go over my active armoury an ensure all water blasters are in good, clean, working condition. While I do clean and empty my blasters prior to storage, a few months in a box can still result in some dust accumulation (and the occasional spider web if my storage area isn’t sealed tight). It’s also the time I make decisions on what new blaster may be worth adding into my active armoury and what, if any, blaster should be moved from active to long term storage.

What do you do with your armoury at this time of the year?

Aimed at those looking for advice on how to get the best water blasting for the buck, this guide strives to balance objective performance statistics together with cost and user preferences. What is the best water gun for one is not necessarily the best blaster for another.

Of course, while every water gun has its use somewhere, the water blaster models we try to recommend are ones that are more flexible on the field.

In the end, individual preferences may have you choose one of the models not recommended, but it is always better to know your options to improve your ability to make the best choice for YOU!

Note: This article was written by The Oncoming Storm – it is being reposted here since the forum it was originally posted on is being closed.

The results to which I an referring are those of the modern AP guns that were tested, Namely the Gorgon, Colossus, and Colossus 2. Here are their results against each other.