Me and Evangel have been arranging this for a few months, and I’m thinking of having it this Saturday (June 21, 2008) at around 1:00. (probably have to change it to 2:00 or 3:00 since some people will be busy) I don’t have the address of the place yet, but it should be somewhere between Troy and South Lyon. If, by any chance, other players or teams can make it, let us know and perhaps we could form alliances. Game mode will most likely be 1HK elimination, but we can arrange for other gametypes if everyone agrees. As for water access, I’m not exactly sure on it yet. Its a park so there should be water access around. Still, I’d bring some refill bottles, sidearms, etc. which I always do anyway. 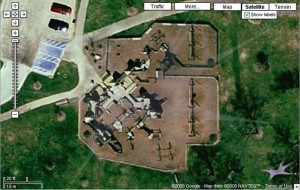 The event’s going on today. Right now we’re just getting equiptment and will be ready soon. Unfortunately, however, I was an idiot and forgot to charge my cell yesterday and I’m charging it right now, hoping it’ll be well working by the time we have to leave. I’ve also been doing some last minute equiping and need to do some last minute reliability testing on a 12k. It seems like my ability to take pics and vids of the event will be a bit limited though.

First, I could only assemble a team of 2, then the third one, who never showed up at my house, drove himself all the way over. One person got sick, one person pretended he thought it was the week after, and another said his parents wouldn’t let him meet up with “strangers in a place they don’t know…” Basically, half the team was mentally disfunctional this morning, and only one was actually sick and couldn’t come.

We carried the following: (2) Flash Flood, Orca, Tiger Shark, (2) CPS 12k, 10k, 2700, 2100, Max-D2k, (2) Max-D3k, Max-D6k, . We actually only used a portion of that, which was enough to arm the whole team with at least 2 weapons each. Later, someone from their team joined us due to the outnumbering. We used just the CPS/HydroPower based weapons (except for the Tiger Shark) and my sidearm: MAx-D2k.

The others had: (2) Monster XL, Monster X, (2) CPS 2500, CPS 3200, Arctic Blast, Flash Flood, Vaporizer, HydroBlitz, Blastmaster 660, ShieldBlaster, Orca (whose trigger was leaking pretty badly), a ton of 100oz AquaPacks, and perhaps a ton of other stuff I can’t recall at the moment. One of them was dual-wielding 2500’s and had a 3200 strapped on. I don’t recall seeing usage of the MXL though.

Basically, we meet along a large wooden play structure with many high points and very tight spaces to get through them. Everywhere around, there’s blind spots to sneak up on, so team coordination was critical, which we were strongly lacking. At the start, I had trouble getting the team to cover the flanks, so I’d often get Flash Flooded from behind. We started with 1HK respawn, 10 seconds at spawn point and 5 second grace period, then moved onto 1HK elimination.

Some cheating was present, however. I’ve gotten a report from a teammate of someone ignoring a water balloon that smacked right on his heel. Also, another point, I was up on high ground and someone with a ShieldBlaster approached. I fired around and supposedly he blocks all the shots, then I fire at his legs and feet and apparently, he didn’t call the hit. A few seconds later, I was shot from below the structure.

Tactics: Evangel’s dodging and ninja maneuvering and tactics were somewhat amusing to watch. As fast as he dodged, I spreaded out my tap shots to ensure a hit, though he’s also the one who’s sneaked up and FF’d me a few times. Basically, I stayed in the same spot a bit too much, the rest of the team got killed, and I get outnumbered. Otherwise, our team would stay disorganized to begin with (partly due to the seperation of spawning) and I’d get sneaked up on. Overall, their divide and conquer tactics worked partly due to lack of coordination.

Refilling and water balloons were a pain in the ass. I never figured the water balloon filler nozzle would stick onto the sinkheads, and also, we had to fill up most guns by using .5L bottles, which took quite a while for the 2700.

At the end of the event, Evangel pulled out a squirt pistol, so I fumble through my equiptment and pull out mine, and to my dismay, it was empty, so I had to resume fighting with whatever water was left in my MD2k. (during the car ride back, I found that it basically cracked itself apart inside my equiptment and all the water leaked out) After a close look, turns out we got squirt guns from the same package: a 6 pack for $1 at Wal-Mart.

Scores. I lost count of kills/deaths during the respawn game, but it was pretty evident that we lost that one. Later, we also got eliminated first for most of the 1HK elimination. (if not all of them) Some of it was due to cheating, some of it was due to my poor decision to go heavy (2700 + FF + MD2k) early in the game. Our team coordination, however, supposedly improved a bit near the end. (based on reports from teammates) No official scores here.

Weather: First sunny, then light to medium rain w/ background thunderstorms. This kept everyone under the shelter so we didn’t have to worry about accidently soaking “civilians.”

Next up: Rather than going all the way to Novi or wherever around there again, I’m planning to stage a near-home war at one of our local parks. Woodchips and sand aren’t very nice either. We’ll probably be fighting in the woods, but the area I’m looking at overall may be too open.

Yeah, easy cheating is kinda why I’m against 1HKs as my main game type. Yeah I did notice Gonzo kinda cheating with that shield, but on the subject of that grenade, I couldn’t tell exactly if it hit me, it kinda felt like it landed right next to me, difficult to say though. 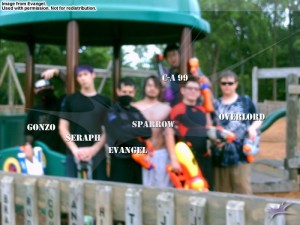 Well we got one group pic, but unfortunately I decided to use this cheap, compact all-in-one piece of junk, so the image is very VERY blurry… It’s a multi-function digital camcorder, but turns out that rather than doing just one thing with okay performance, it does several different things with equally horrible performance. =/